Hello! What's your background and what are you currently working on?

I'm Rich, founder of Failory, a content site for entrepreneurs and startup founders. I'm from Buenos Aires, Argentina and have been running this as a side project for the last 2.5 years.

Initially, Failory was a site of interviews with entrepreneurs. However, it has grown to something bigger, where we also publish blog articles, analysis on why big companies shut down and a podcast is coming soon.

During the first year and a half, Failory made no money. However, when I started accepting sponsorships and adding some affiliate links, I also decided to open my metrics and share how the startup was doing it.

The first is a podcast's launch. It's called The Failory Podcast and it is about interviews with entrepreneurs who have failed with a business in the past, but now run successful companies. We've already recorded 14 episodes and should be launching in the upcoming 2 weeks. It's a huge project and really significant for me, as it has been requested since the moment I launched the site.

The second one is a new website. We're moving from Webflow to WordPress and we have decided to do a complete redesign. The whole brand and business strategy is changing because of it.

The third is the blog's boost. I've decided to start publishing more (SEO-optimized) content on the blog. I've already written 4 long pieces and I'm hiring some writers to write +30 pieces. I want to move the organic traffic/day from 1000 users to 3000 and then to 5000.

What motivated you to start Failory?

Seeing that so many people were talking about success but few were doing it about failure.

Content sites for entrepreneurs talk too much about success and about entrepreneurs who have raised millions of dollars and grown their company to teams of hundreds.

But that's not what happens most of the time. 90% of startups fail, so I decided to get to know about these and learn from their mistakes.

Through these interviews, founders within the same niche, country or with some common characteristics, can learn what this failed founder does and avoid it within their businesses.

How did you build the initial product?

It was super simple. I think it took me 2-3 weeks. I did it with Webflow, which I really recommend to everyone. I had no experience using it and was able to build the whole project in a really amount of time.

Then for the interviews, I contacted hundreds of people and was able to get 9 interviews.

I run it as a side project for now, looking to turn it into my full-time business in the future. I have always been really great at managing times and getting things done. I make a good balance within all the things going on in my life.

I chose no specific schedule to work on Failory and have never canceled meetings with friends or family to work on the site, but I generally have my emails on my phone.

Which marketing strategies did you use?

I got the first users in ProductHunt and Hacker News, during my launch. Then, after that, I kept bringing traffic by publishing new content and new features.

I have tried running some ADs without huge success as well as guest posting, although this last one boosts Failory’s SEO power.

The tactics that worked the best were launching the Startup Cemetery, the weekly newsletter with the new content and securing some interviews with amazing entrepreneurs.

Why did you decide to operate as an Open Startup?

I loved when other companies shared their numbers openly and found it super useful. So I decided to do something similar.

I created an /open page, placed some Google Datastudio graphs and started writing monthly reports. I then promoted them in some communities and with Failory’s audience.

There was a great reply by the users, most of which claimed they found them super useful and inspiring (although Failory was making only a few hundred per month).

It also helps me to keep accountable and see how Failory has been doing it lately. I see a great trend in terms of revenue, which is lately growing. However, at the same time expenses are increasing. I’m investing more and more into content and improving the site. 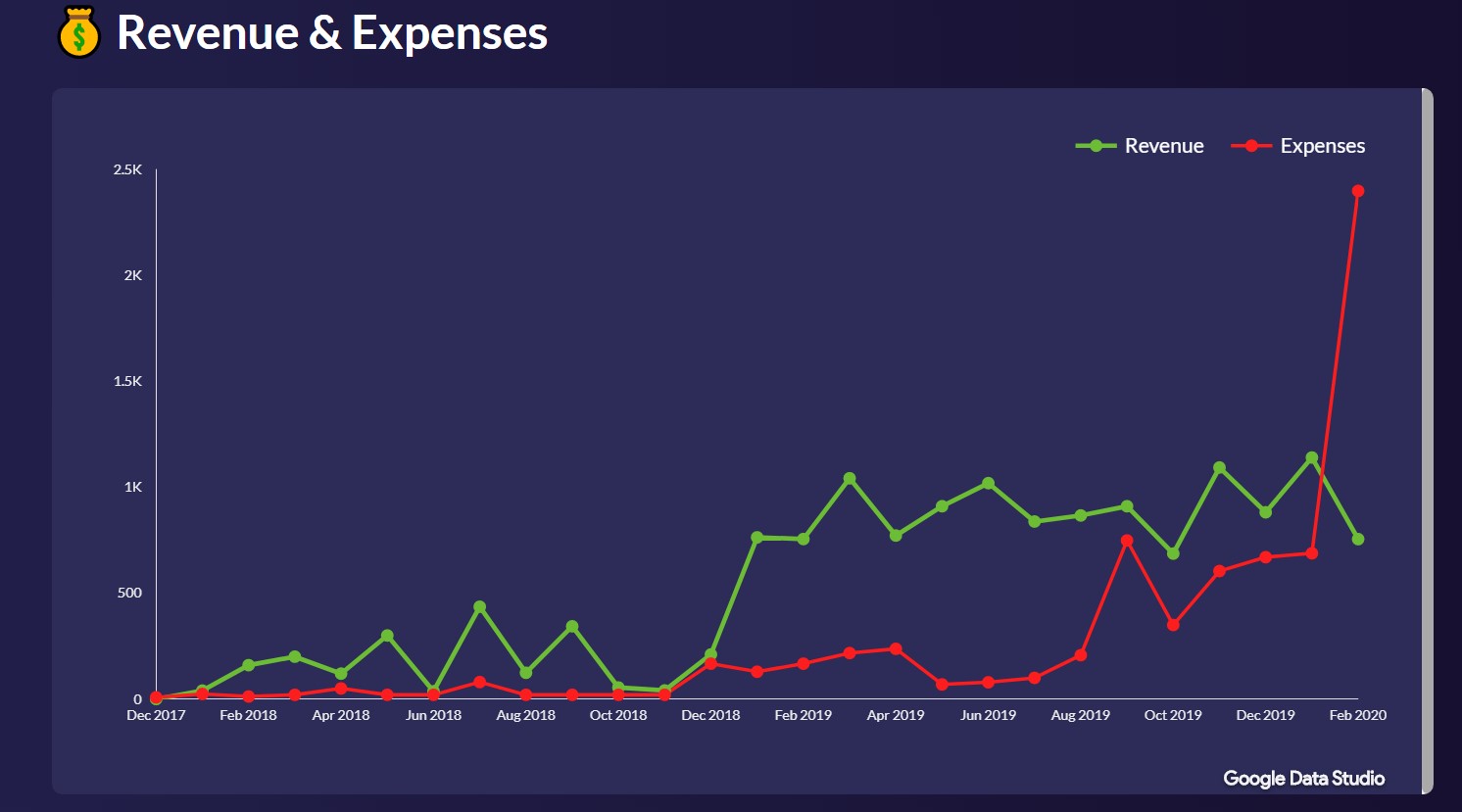 As for the expenses, they vary month to month but these are some frequent ones:

I don’t feel like being an open startup has been significant in Failory’s growth but I do believe it has strengthened the relationship between the site and some users. There were some bad months in which it was also super useful to have a number of users telling me to not worry and to keep focused on Failory.

What were the biggest challenges you've faced and obstacles you've overcome?

Being a solo founder and having work + life + Failory going on. I've said I manage it well, but in times where I really want to make Failory grow and it meets with a lot of work to be done on my full-time job, it becomes super exhausting.

My advice is to keep consistency. As you stop publishing stuff, as I did for some weeks and months, your traffic will decline and your users will become less fans.

If I could go back to the starting point, I'd change many many many things. I would focus on building a great community of true fans. I'd try to ensure high-quality stuff from the beginning. I'd work on Failory's brand a lot.

Where can we go to learn more?

You can check out our website here. You may also want to keep an eye on our podcast page, where we should be launching episodes in these upcoming weeks.