How learning by doing helped BannerBear grow to 500$ MRR

Hello! What's your background and what are you currently working on?

I’m Jon Yongfook and I’m the founder of Bannerbear.

Bannerbear is an image generation API. You design a template using our template editor, then you hit the API with data and Bannerbear generates image variations for you. My customers use it for generating ecommerce ads at mass scale, or for automating their social media.

I’ve been working in tech for around 20 years, have started and sold a few small startups but this is my first “open” startup!

What motivated you to start BannerBear?

The idea came from a few different places but I’ll try to articulate this from a macro and micro level.

At a macro level, for a long time now I’ve been interested in the idea of making design more accessible.

There’s many different ways you could go about that. You could teach people how to design, and there’s lots of great tutorials out there on this. You could make better tools for designing, and I think canva and figma are doing an excellent job there.

But the engineer side of me got thinking about how would you apply “scale” to “making design more accessible”. So for the last year I’ve been building various tools that have something to do with image generation.

It took me a while to navigate to this point, but I realized that the purest form of applying “scale” to a problem/solution is to build an API for it. That way, anyone can take your API and apply it to whatever specific use cases they might have. And that’s what Bannerbear is.

But on a micro level, I have personally felt one of the pain points that Bannerbear solves. A long time ago I worked in ecommerce and one of my most hated tasks was creating banner ads off of a product list. The marketing team would want essentially the same template used multiple times for a list of different products. It was all tedious, manual work and there was no way to automate it. With Bannerbear you could now set the marketing team up with an excel sheet of product data and have that ping the Bannerbear API periodically to auto-generate all the images they need. 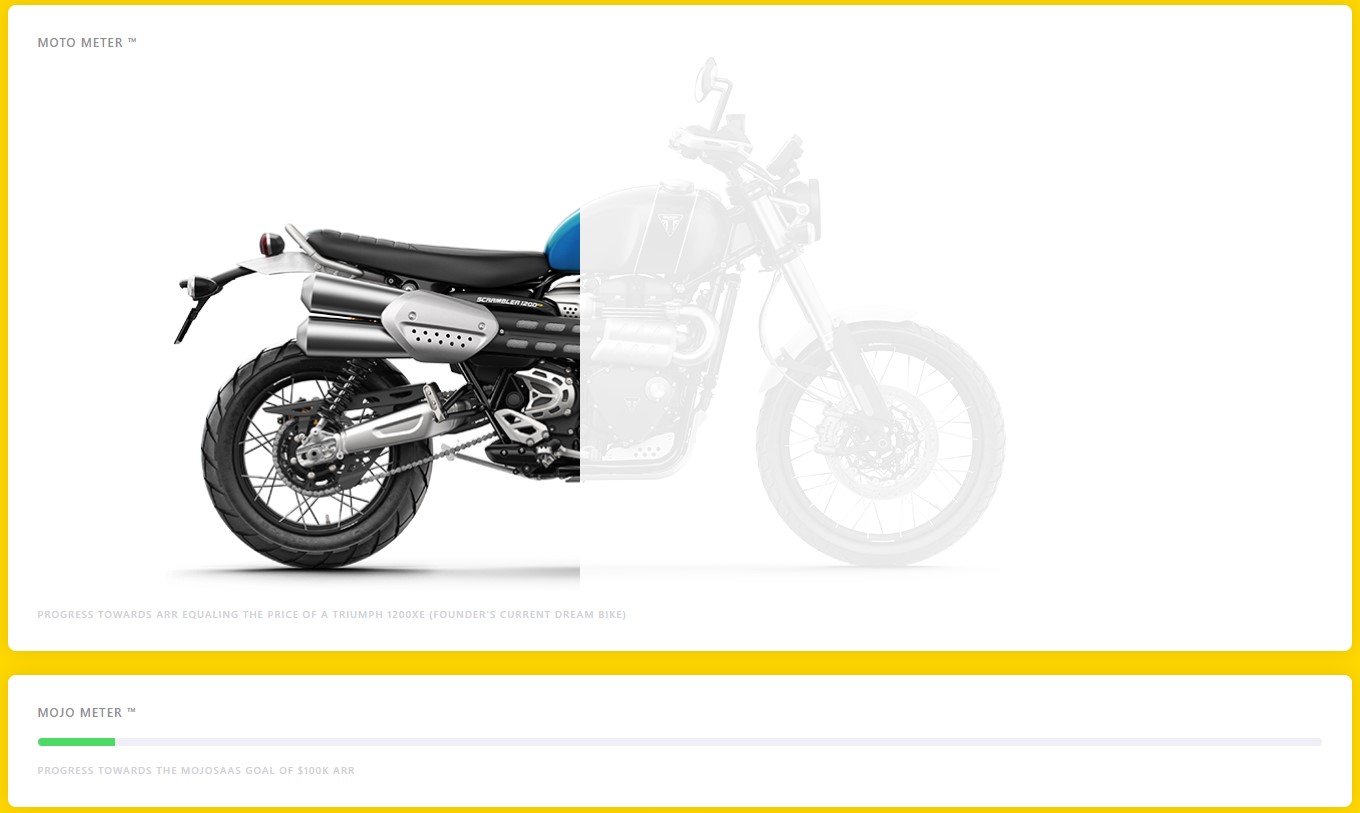 How did you build the initial product?

I’ve been using Ruby on Rails now for about 10+ years so as far as tools go, I’m very comfortable with it. I use it for everything.

Bannerbear started life as a product called Previewmojo, which was a plug and play generator for opengraph images.

It was a lot more limited than the current product. You basically chose a template from a small selection, then Previewmojo would scan your blog and generate opengraph images. It all worked pretty well and received a warm welcome on Producthunt, but the market just wasn’t there. I realised how few people actually knew or cared what opengraph images were, and trying to quantify the benefits of using such a product were really difficult. “Save a few minutes each time you publish a blog post!” isn’t exactly the world’s sexiest value proposition.

In addition, I think I ended up throwing away about a month or more of work before the API pivot when I was testing the waters with the Shopify ecosystem. Long story short, I built a version of my app for Shopify and it bombed. I think there are certain types of SaaS products that suit the Shopify ecosystem very well but mine wasn’t one of them. My only advice here would be that if your app requires users to “add some code” to their site, then you’re going to have a tough time. But if you’re building a SaaS that just uses the Shopify API seamlessly in the background, you’ll probably have a much better experience than I did :)

Through launching fast and learning via feedback though, I realised that at a high level the technology was useful but the positioning was wrong.

I received email after email along the lines of “hey there I don’t know what opengraph images are but could I use your app to generate images for XYZ purpose?” and “can I upload my own templates?”. Which is when I started to realise that the product needed to be an API - that way I could serve many more use cases, and also far higher up the value chain than opengraph images.

I relaunched Bannerbear as an API product in March 2020 and things have been pretty positive since then. The most exciting part is that my customer service inquiries are from people who have real business problems they need to solve, such that I can instantly see the value that Bannerbear would bring to the table. I never got that with the previous versions of the product!

Which marketing strategies did you use?

It’s such a young product that all I can say at this point is that I’m thankful for the audience I’ve built up over the years on twitter, and have had a couple of successful launches on Producthunt. I don’t think these really count as marketing “strategies” ; they are really just how I’m getting the initial word out.

Going forwards though, content marketing is going to be my main marketing strategy. I’m planning to fill the Bannerbear marketing site with as much tutorial-style content as I can, as that seems to be working well so far. I think that’s sort of a general can’t go wrong piece of advice for life in general. When in doubt, just share your experience and know-how - there will always be someone out there who it’s useful to. 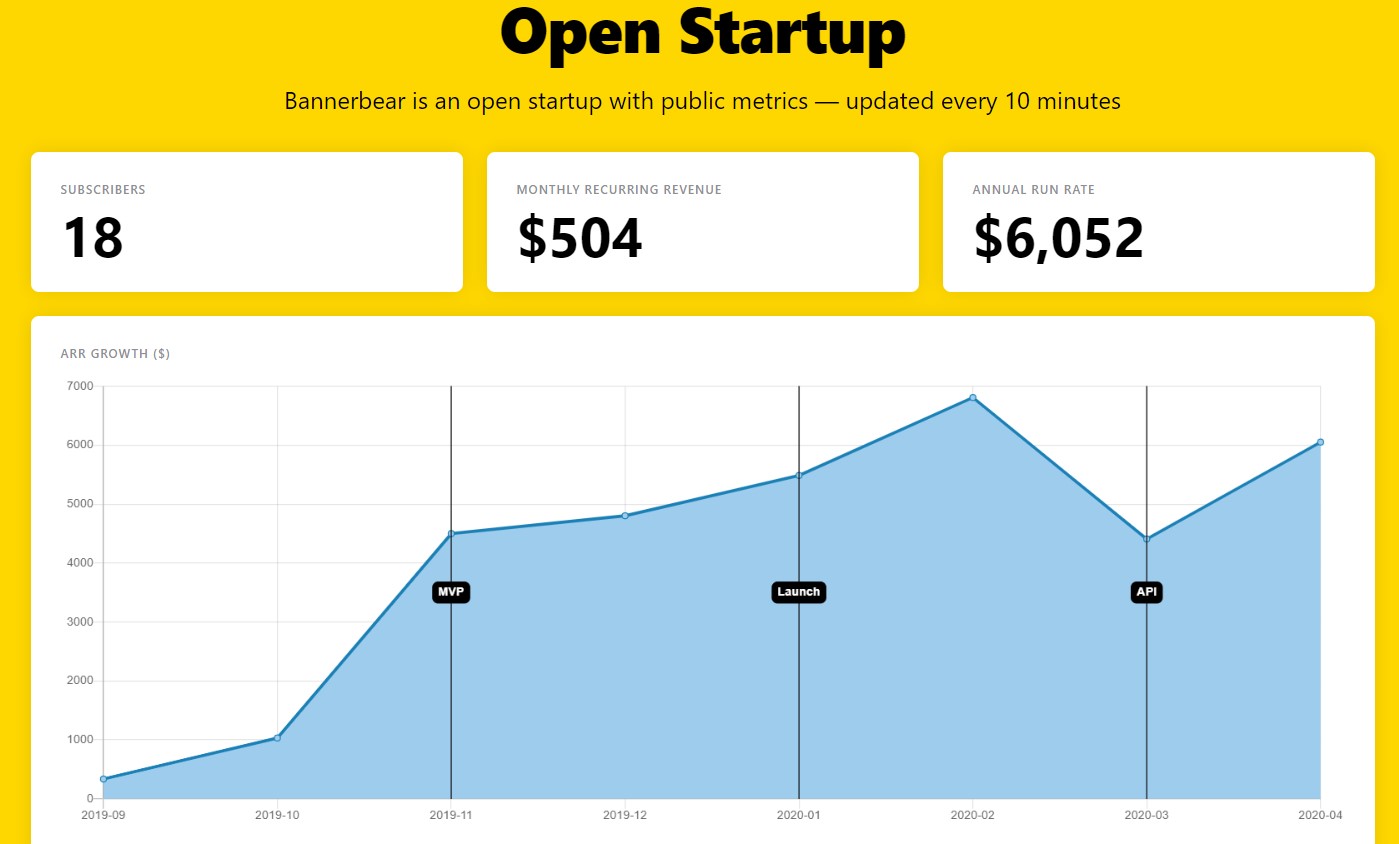 Why did you decide to operate as an Open Startup?

My decision was decidedly un-strategic. I’ve received a lot of benefit from other startups operating transparently over the years e.g. Buffer. Those benefits have come in the form of tangible operational knowhow or ideas, or simply in the form of inspiration.

So I figured it’s important to keep that tradition going. Like I said above, sharing knowledge is almost universally a good thing. So perhaps my numbers currently don’t tell much of a story to most people, but there might be one or two out there who find the numbers useful for their own journey.

The graph is trending upwards but it’s also early days, and we are now heading into an unprecedented economic crisis. So I know I’m going to have to really hustle for growth here on out. I’ve already seen some churn coincide with the Covid-19 pandemic and I’m sure I’ll see more - but hopefully I can come out net positive.

I’m keeping my expenses low by being a one-man show and by living life as a digital nomad. I used to live in Singapore, one of the most expensive countries in the world, and had a healthy corporate salary… now I live in cheaper countries and keep my burn rate an order of magnitude lower than my “old life”!

What were the biggest challenges you've faced and obstacles you've overcome?

I think my biggest mistake was one that many entrepreneurs make - I didn’t talk to customers enough in the beginning. This is so common that it’s almost an entrepreneur rite of passage to “accidentally” build something that people don’t really care about (my version 1) because it doesn’t solve a big problem for them.

It was only after talking to many users / customers that I realised where the opportunities were to solve larger and more valuable problems.

That said, I would only have been able to get feedback from people by actually getting a version 1 out there in the first place. So I think there is still value in getting an MVP launched quickly and in the hands of customers, if only to view it as a conversation-starter on what you should really build.

What's your advice for makers who are just starting out and want to build an API?

If you want to offer an API, you must know and love APIs! Use lots of them, learn what makes them pleasant to work with, and then build your own.

Where can we go to learn more?